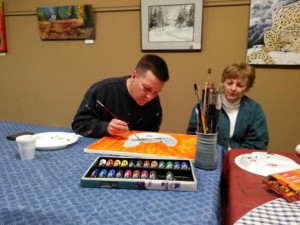 Sheriff Smith has completed an acrylic portrait of the family cat, Lehrte. Lehrte was named after the home town in Germany of a former exchange student of the Smith’s. This is the first painting that the Sheriff has ever attempted.  He played around with several ideas, but decided to focus on the gray feline.  He came to two open studios at the Gallery at the Holland and was helped by artist Nancy Bassett.  We think you will agree that he has captured the essence of this cute, cheerful gray kitty.  Sheriff Smith said that he had much fun in this adventure with paint and he hopes to continue this possible new hobby. 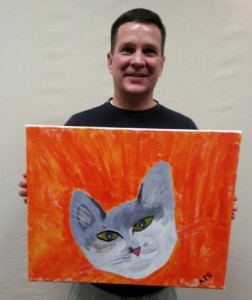 All of the completed artwork of the 15 participating artists will be on display at the Gallery at the Holland and from January 21 to February 12 the public is invited to view the work and vote for the best (or worst) artwork. Voting costs $1 per vote, and there are no restrictions on the number of times you can vote.

The art will be auctioned at a dinner event to be held at the Holland Theatre on February 12th and the winner will be announced and receive a special trophy.

Sponsors to date of the event are:  Mary Rutan Hospital, People’s Savings and Loan Company, and Josip and Tonia Terebuh. If you would like to become a sponsor or would like more information on the event contact Karen Feltham at 937-468-2874.